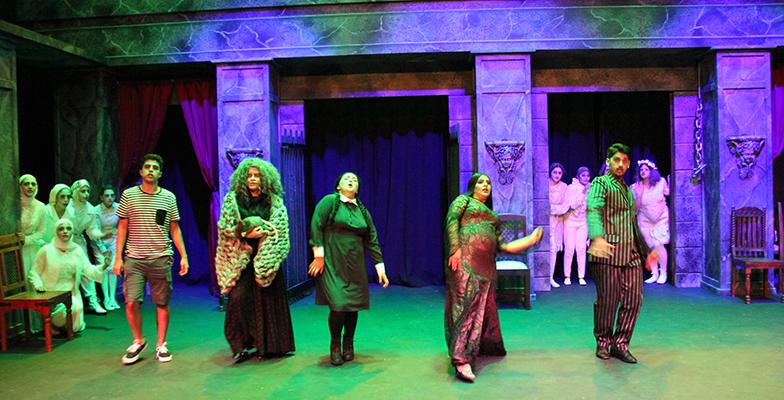 "Addams Family: The Musical" opens to packed audience at AUS

The much-anticipated student production Addams Family: The Musical premiered last night, November 5, to a sold-out audience at American University of Sharjah (AUS). The exciting and toe-tapping show is based on the popular TV and cartoon series The Addams Family created by Charles Addams, about a ghoulish American family with an affinity for all things macabre.

Freshman Vighnesh Prasad, who had heard about the musical on his very first day at AUS, decided to audition and landed a major role in the production, playing Gomez Addams. “I wasn't aware of the Performing Arts Program before joining AUS. I heard about the play and decided to give it a try and couldn’t believe that I got such a big part!” said the English language and literature major. “Theatre has always been important to me and I am excited about this experience.”

Students from all majors at AUS are welcome to audition for on-stage and behind-the-scenes roles in the program’s productions. This past spring semester, Farah Kanawati, a junior in the School of Business Administration, took a theatre appreciation course that led to her interest in the Performing Arts Program. She worked her way up from selling tickets and being an usher to her current position as Head Stage Manager of the musical.

“Prior to joining AUS, I never would have thought that I’d take part in such an experience,” said Kanawati. “Going from high school to university might be intimidating, but students should always be open to the various opportunities that come their way at university. I expressed my interest in stage managing to Professor Tassa, and that is how I became a part of the Performing Arts Program.”

Tassa noted that these opportunities are beneficial to students from all areas of study: “These types of artistic experiences provide students with many of the soft skills necessary to succeed in any chosen profession: time management, organizational skills, responsibility, communication, but above all, ensemble. The idea of teamwork is an essential component of any successful theatre production.”

According to Kanawati, productions such as these provide a great change of pace for students. “Dealing with courses and exams can be overwhelming at times. For students attending our performance, it is a good way to ease stress and relax. And for our performers, this is a great platform for expressing their creativity.”

Speaking about the production, which went into rehearsal in September this year, Prasad said: “Performances like these expose students to not only the experience of theatre, but also a broader and more fruitful experience of working together, figuring things out and coming up with creative solutions.”The play is the fourth musical and the latest in a series of acclaimed productions staged by the AUS Performing Arts Program. As one of the rare programs of its kind available in the region, the program enables students to study the exciting fields of music and theatre and to showcase their talent by performing in concerts and theatrical productions. It also offers students a minor in theater or music, with courses that supplement any course of study at AUS. Students also gain valuable hands-on experience by participating in the technical and backstage components of music and theatre productions.

Addams Family: The Musical will run until Wednesday, November 13 and is open to the public. For more information, please visit www.aus.edu/media/events/addams-family-the-musical.